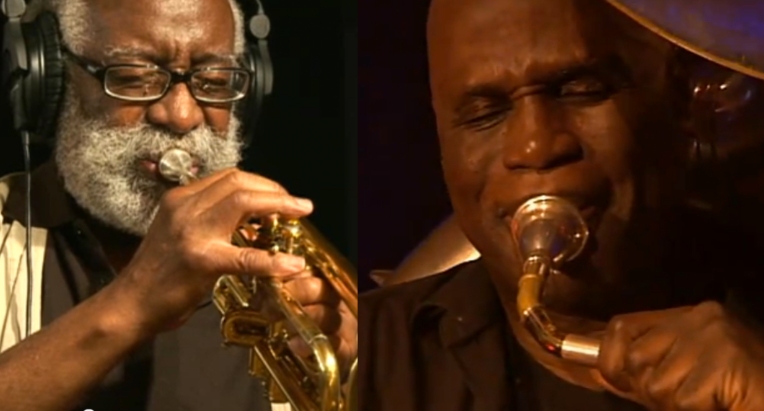 LISTEN TO THE INTERVIEW.

I recently spoke to Jeff Burns and Robert O’Haire (Straw2Gold Pictures), creators of the films Bill Dixon: Going to the Center and Joseph Daley: Earth Tones Ensemble which will be screened this coming Tuesday at part of the ongoing events for Vision Festival 2010, a festival devoted to the celebration of avant-garde jazz, dancers, poets and visual artists.

Vision Festival was originally envisioned by dancer and choreographer Patricia Nicholson Parker in 1996 and developed by Arts for Arts Inc with the help of its board of directors, Lewis Barnes, Jo Wood Brown, Whit Dickey, William Parker ,John Schiek, and Bradford K. Smith. The Festival takes place over 7 days from June 5th-11th and includes an abundant amount of events taking place in several locations including Abrons Art Center, Clemente Soto Velez Cultural Center, and Campos Plaza Playground. Vision Festival remains an unusual and inspiring event in is ability to survive without the support of commercial sponsors.

Bill Dixon was a musician (trumpet, flugelhorn and piano) and teacher born in Nantucket, MA. His early studies came from the Harnett Conservatory of Music and (contrary to my misinformation) he studied painting at Boston University, WPA Arts School and the Arts Student League. He]worked at the United Nations and founded the UN Jazz Society, as well as the Jazz Composers Guild. He has worked with Archie Shepp and Cecil Taylor and was a professor of music at Bennington College for nearly 30 years. He passed away in June of 2010.

Joseph Daley attended Music and Art High School and the Manhattan School of Music. He has received fellowships from the National Endowment, MacDowell Colony, Music Omi, and Geraldine R Dodge Foundation. He also taught music for 30 years. His first album, The Seven Deadly Sins was released in 2011 and he currently plays and is touring with his collaborative project with Wade Schuman, Hazmat Modine, which just released their second album Cicada.

You can see Jeff and Roberts films on Tuesday June 7th at Abrons Art Center in Manhattan at 7pm. The evening is curated and co-produced by The Festival of New Trumpet Music and includes several music and films events.

*The Edgar mentioned in the interview is Edgar Oliver, poet and playwright from New York City.

One thought on “VISION FEST 2010: SCREENING OF BILL DIXON GOING TO THE CENTER AND JOSEPH DALEY EARTH TONES ENSEMBLE.”