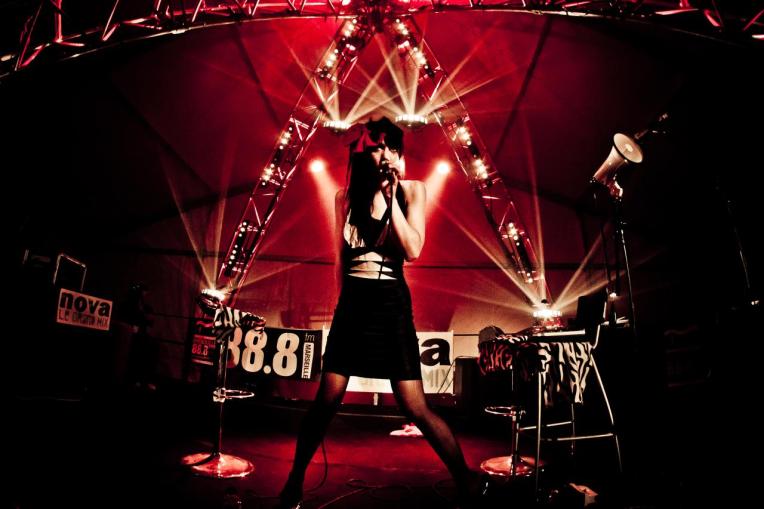 LISTEN TO: Heart of Nature

THE 22 MAGAZINE: I’d like to thank you for having an interview with The 22 Magazine.

BONNIE LI: Thank you! I’m super excited to be doing this interview.

22: –Laughs– You’re welcome. In fact, you just met me from your studio. What were you working on?

BL: I was working on my last track which is called “Hey Man”. It’s very electronic and…high beat? I don’t know if you can say this.

BL: It’s going to be a total surprise for the [Francofolies] festival. So I hope it’s good.

22: So how do you feel about the festival? I know there are a lot of big names there like David Guetta and Jean-Louis Aubert (from Téléphone).

BL: I feel super excited because, of course, it’s going to be my second big festival, but the biggest I’ve ever done.

22: It must feel exciting obviously to be performing…like “I’m here with Mademoiselle K!”

BL: –Laughs– I know. At least I’m trying not to really think about that.

22: I just love to make you nervous before a big show.

BL: –Laughs– Yeah, I know, thank you. You’re actually doing this very well. In fact, I try to think about my work but I think it’s going to be a lot of fun. We’ll see. It’s a festival so people are happy to be there

22: How do you feel when you get on stage? Do you get nervous?

BL: Not really. I’m really Zen and really cool. I’m not [one of those] artists who gets sick before going on stage. Normally the artists go and lock themselves backstage and, you know, do breathing exercises. I can’t do that. I’m like, “Oh, I play in fifteen minutes! I need to go and get ready,” you know, change and put my make-up on and, make up my big, fat bow [hairstyle]! And then I look at myself in the mirror, and say, “You can do it! You can do it!”

BL: No, no, no! Not at all. It’s just, well…there’s this new kind of website…and when your EP is released you pay like forty bucks or something and they put your music on all of the digital platforms (Deezer included) where people can buy your music.

22: So is there a Volume Two coming out?

BL: –Laughs– Yeah, if everything goes OK. I don’t really like studio work. I’m much more of a performer, a live artist. So when I decide to go into the studio, I do it very fast. In a week I’m going to record my second EP, and it’s going to be released, hopefully, in late October.

22: Will there be a similar theme as Volume One?

BL: Yeah, it’s going to be in the same vibe, [even] though it’s an evolution. I’ve been working more on sound research and sampling. It’s a little more precise and electronic.

22: I understand that you went to music school.

BL: “Bonnie Li” didn’t exist when I went to music school. It [music school] was just me trying to reassure myself that I was really made for this. It took me a while to actually spread the news to family and friends [that], I really wanted to be a famous performer. Because I was like, “Who the fuck are you to go and tell people you’re going to make it?”

BL: [At] school. They organized little gigs. The first time I went on stage I felt something that I had never felt before. Something that was so deep and huge at the same time.

BL: Exactly. There was no choice. Yeah, definitely, I was made for that.

22: Having a one-woman show must be very heavy on you?

BL: It’s heavy, but it’s relieving because I know I’m the one doing everything, so I’m not scared something is going to go wrong. If something goes wrong, it’s because of me.

22: Could you tell me a story about something that went wrong on stage?

BL: Definitely. I can tell you the last big festival I did was Marsatac. It was originally a hip-hop festival in Marseille but [it] opens its doors to all kinds of styles of music now. So I was up there on stage and did my first loop and everything was OK. So I’m like, “Everything’s going to go fine.” So I played the second loop – no sound. I’m like, “What’s going on?” So at one point I just cut it off. –Laughs– I think that I was the first artist in the history of the festival to actually make a big BLANK. But it was fine. I just told a story and was like, “I’m sorry, but I’m having really big technical problems…so there’s nothing we can do, but try to fix it.” Then, I sang a- capella or something.

22: Yeah, you improvised and I’m sure it was a great show.

BL: Yeah, people were like, “Woo-hoo, you did a-capella!” They were so nice –Laughs-.

22: On the other side of the coin, what are some of the best moments you’ve had on stage?

BL: It happened a couple of weeks ago.

BL: Yeah, well… I’ve had many, huge, intense moments, but a couple of weeks ago I played at this club called the Barbara-Centre and people knew my music, so they were actually singing with me. It was the first time it ever happened, and I was like, “This is totally insane!”

22: –Laughs– That must have been amazing.

BL: Yeah, it was crazy. When you realize that people know your music…you don’t know them apart from maybe your friends who are always there [at the live shows]. So, yeah, it was really cool.

22: You’re really becoming an artist that people know and it must feel a bit rewarding, I’m sure.

BL: Yes, it is. Definitely. And I….. “Well, you should continue that. You’re [going] in the right
direction.”

22: In terms of touring, do you have any international plans?

BL: I’ve been touring in Europe since the beginning of my Bonnie Li project, so it will be two years in August. I’m often booked in Berlin and Austria because I got this small underground feminist electronic label there.

BL: Comfort Zone…they release my vinyl…so I have a vinyl –Laughs-.

BL: Yeah, and there was this funny meeting…this girl, she heard my music in a bar in Berlin and I was totally wasted. She was like, “Oh, you’re so weird! Do you want to be on my label?” and I was like, “What’s your label?” and she said, “It doesn’t exist yet. It’s going to be called Comfort Zone and it’s vinyl only. Are you interested?” I was like…

BL: And two weeks later I had my vinyls.

BL: It is crazy, but that’s how I also like to work. It’s life…it’s how I create my music. By experience, by [meeting] cities and people in general and when I work with people. It’s very recently, I’ve been working with other people. Before I used to do everything alone.

22: So do you notice a difference now working with people compared to working alone?

BL: It’s faster now, but the way of working is the same, and I still do everything on my own. I take my samples, I work on my computer, I record everywhere; I try to put this in order and then I go to the home studio, to Max, the guy from the label and we record the voices and then we do a little mixing – cleaning up. I then export those samples with my sampling machine and the quality is actually better than what I used to have, but the work itself is the same.

22: I understand that you write stories and then base your music on these stories. Is this your process?

BL: Yes, exactly. When I write something I instantly have the melody. I have this crazy friend. She has this old scooter and it makes this weird sound when she starts it, so I sampled this weird sound and I cut it, distorted it, and made it my loop.

22: So you take samples from your actual life experiences?

BL: Well, I see Bonnie Li…I want Bonnie Li to stay the same. This is very important for me. I don’t want to be another person if I become bigger. I’ll still be me, and I’ll still want to play underground someplace in a squat. This is very much part of me and my music. Because I sing in Chinese, English, and a little French, it’s very important for me that my audience understands what I’m saying. So I’m actually working on videos to project during my shows, so I can loop my music with these images.

BL: Yeah, so people can understand more of what I’m saying…using subtitles. This is going to be a huge step once I have projections. I’m going to do a little mise-en-scene that I don’t have right now. I’m going to be the one who’s going to manage that too. So this is very important for me to be the one who’s going to do the managing. [For my shows] I do this sort of “welcome to Bonnie Li Air” flight thing that I want to incorporate the projection [and] loops into. I’m actually working on building a cockpit.

ABOUT MATT MOWATT: Matthew Mowatt is currently working as a freelance editor and English teacher in Paris, France. He’s searching for publishers to accept his first finished novella and in the meantime, he seeks out musicians and writers for entertainment of the inspirational kind. He occasionally contributes to his own fanless blog (fairweather chronicles) when he’s licked by life.

One thought on “An Interview with Bonnie Li by Matt Mowatt.”