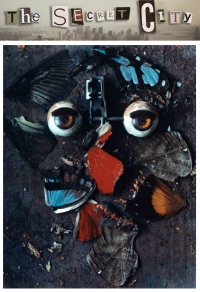 I’ll be devoting some of this week and the next to showcasing some of the amazing artists that make up The Secret City . They need funding for the new season and I’m pretty convinced once you see what’s in store, you’ll want to give it to them. Donate if you can and enjoy!

Martyn Thompson is a groundbreaking photographer of still-life’s and interiors.

Born in London and raised in Sydney, Thompson studied fine art and literature at Sydney University. After finishing school in 1982, he visited New York City, and this trip made a lasting impression: the music, the clubs, but mostly, the city and its people.

“New York was the birthplace of ambition for me. Everyone was about to Be Something.” Back in Sydney, Thompson began to paint fabrics, turning them into skirts and, with a group of young designers, opened a boutique called Ox. Eventually he took pictures of his designs and became more interested in the photographs than the clothes.

In 1983, Thompson says, “I saw photos by Paolo Roversi in British Vogue – they were like paintings…”

Thompson became a professional photographer. In 1988, he left Australia for Paris, where he shot fashion exclusively. Thompson’s fashion photographs always involved close attention to interior environments, real or fabricated. In 1991, he moved to London and along the way, began taking pictures of the interiors without the clothes, and it is here that Thompson has made his mark in the world.

In 1994, Thompson became one of the founding photographers for Elle Decoration and, along with famed editor, Ilse Crawford, created a new way of looking at interiors and objects; today, Thompson is credited with much of the change that took place in the industry.

“I came at interiors from a fashion point of view. The equipment I had was fashion equipment, so what I shot once I started getting into interiors were the details and the spirit; not the sweeping view, but the up-close view, and somehow this had an impact on how people looked at interiors.”

Thompson made two books with Ilse Crawford: The Sensual Home, and Home is Where the Heart Is.

In 1999, Thompson moved to New York, finding inspiration in the music, street culture, and everyday life of the city.

An interior by Martyn Thompson has a sense of narrative: someone is about to arrive, or someone has just been called away. He finds the beauty in everyday objects, and captures the life within an empty interior; many photographers do this, but what makes Thompson unique is his ability to convey those qualities in such a palpable way.

It is Thompson’s love of detail, his extraordinary way with color, and profound sense of the tactile, which lend his work such intimacy, blurring the lines between stylist, craftsman and photographer. In this way, each of his photographs is the end result of an improvisation involving light, objects and color.

Interiors by Martyn Thompson will be published by Hardie Grant in 2012.