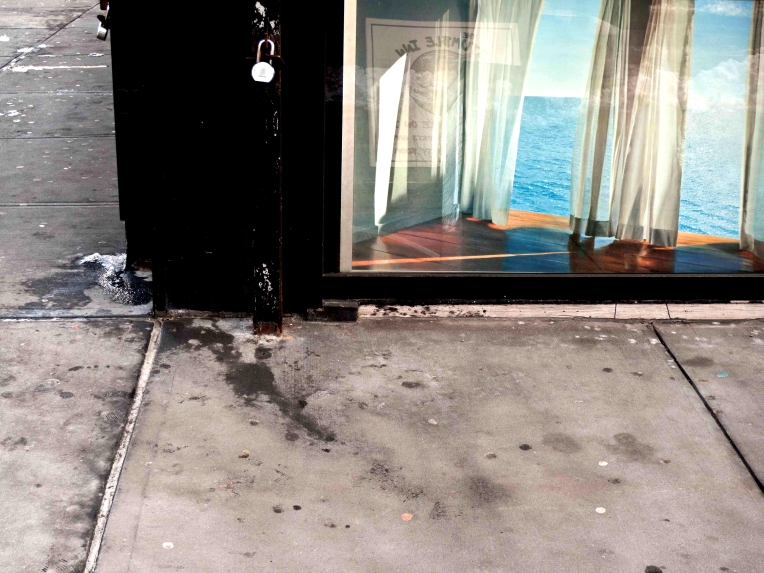 The right amount of sunlight was falling on the terrace but the wind was too brisk. It made reading difficult with all the pages flapping. I moved inside and took a seat behind the street-front window where warmth and light were isolated from the other elements. There were no obvious signs of the wind when looking out from the interior, but I knew there was a strong breeze because I’d been sitting in it.

It was a weekend and some people were out in the streets and in the sunlight. The glass of the window was very clean but looking through it seemed to alter something. A scene played out on the other side of the glass but also upon it as if projected there. A semi-translucent screen. Something about the picture was diluted and unreal, filled with actors lacking an adequate stage-presence. Everything was simplified, reduced by one third. Loose debris had been swept away by the wind and surfaces were without their usual texture. The trawling eye met no resistance – smooth patches of color and shape, fluid images slipping through empty nets. The sky was a singular blue and there were clouds passing by in sets of two and three. Each set waited for the one preceding it to drift out of sight before making an appearance. Interesting forms that didn’t resemble anything in particular. Very white, small patches, moving along swiftly.

People and cars and everything else passed in the same manner as the clouds – one minute per set, each series of forms matching the others in overall proportion. Equal variation and difference, a fluctuating sameness. There was a recreational center across the street, beside a grocers store with larger-than-life fruits and vegetables hanging from the awning. I remembered passing by there one night and witnessing the shopkeeper in his white coat taking down the last two of the fiberglass molds, one at a time, and carrying them into store. His movements were smooth and practiced. He unhooked the large apple and carried it above his head until he reached the entrance of the store, where in a sudden and dramatic motion he swung the thing down to rest on his belly and pass through the doorway. He returned for the banana, placing one hand around its neck and the other underneath to support its base. He held it vertically and walked with the convex of the curve pressed firmly against his chest.

Interior and cafe and thinking through the man and the last two fruits. His being and doing, outside and around. What I really wanted was to spear the slice of tomato on my plate with my pencil and then bring it to my mouth – but without having to clean the pencil afterward. There was a steady flow of cars and trees without leaves on their branches. There were people on foot with plastic bags and dogs and children. There was direct sunlight and shadows with clean edges. There was no real sound to any of it because I was sitting behind glass. I stopped looking at things in order to describe them on paper because I already knew what was there and no longer needed to see it all. For a moment there was a loss of light or a flash of darkness. I was looking down but it was a real event and had taken place in the peripheries of my vision. It was just for a moment but there had definitely been a blink and it seemed miraculous and there wasn’t any sound. In a few moments I would think it through and look around for something to explain it and naturally look upwards and not see anything and then see an airplane. The thing had flown a path that intersected with the line between the position of the sun and my own position meaning that its shadow had passed over me and made the direct sunlight disappear just for a split second. If I had been observing the scene by way of looking at it then I might have noticed the shape of the shadow as it made its swift approach. In that case I wouldn’t have had the pleasure of miraculous momentary confusion, unable to reasonably explain the burst of darkness, the loss of direct light.

I started to feel more comfortable in the scene because I’d been able to provide a description of it in words. I read through the words and the basic image was there but not everything and I felt uneasy again. The words only had access to one or two aspects of the things. The impression of the scene was very strong because of its simplicity but that impression was missing in the description of it. The simplicity became repulsive and I wished there was no wind so that I could sit outside without a jacket and with my skin exposed. I wanted there to be actual life in the streets, actual events happening in full doses. The frustration was physical, everything was so completely there and graspable when it was reduced by at least a third and it wasn’t even the wind that was responsible. The most important things were missing but their absence was more present than anything else and that was nearly the impression it all gave. That was the trouble I had writing down.

A woman sat down in front of the window and invaded everything. The back of her head was within arm’s reach from where I was sitting except for the glass. It was just her hair visible but I could still see her face and knew it was beautiful. I was flushed with an intense desire to know her and I took pleasure in it because I didn’t know her and because she was at a distance. The question of whether or not I would come to know her was pressing but irrelevant. This is what I thought. She was beautiful and I didn’t know her. She had perfect skin all over her body and the wind blew her hair a little less than it blew everything else. I could see the wind in her hair and it explained the other things but there was no longer any simplicity. There were so many hairs on her head that it was overwhelming and I had to concentrate on the word hair as singular and not plural in order to comfort myself.

I stopped paying attention to her in order to write with my pencil and when I looked up again she wasn’t there. I thought about the fact that there was no woman and that I’d only written about her because that’s the sort of thing I’m provoked to do when sitting behind the windows of interiors. I thought about whether or not it mattered if there had been a woman or not because the pleasure had only come from the desire accompanied by the not knowing. The woman had a distinct persona and it was incomprehensible. I felt that I understood it anyway and decided to invoke pleasure through her character.

She was within an exterior – Greece – and there were light winds and the ocean was nearby. She was in the open air and the scene was fully populated and whole. She was a part of the scene but separate from it somehow. She had a carry-bag made of cloth and there were other people on foot, some with dogs and children. There was direct sunlight and sound and she was walking thorough it all towards her villa which was set in the hill that sloped towards the coast. The villa overlooked the town and the cerulean ocean and from the balcony you could see both at the same time and either or individually. Then we were at the villa together enclosed wholly in sex and partially in white sheets and the walls were pale blue in color. She was extremely wet but only in the one place or two. The balcony door was open to the breeze that comes onshore from the sea. The curtains were brushing lightly against the glass and the pale blue of the walls in the same way that her clothes had come off over over her skin. She didn’t say anything because we knew each other incomprehensibly and didn’t need to.

Afterwards we would share a kind of smell that came from the parts of us mixed together and we would move from the bed to the balcony and we would drink white wine from glasses without our fingers leaving any marks on them. She had carried good wine from the town in her cloth bag and left it in the refrigerator because people like to get wine and drink it and also to read about sex and beautiful places. The air is important and the temperature. It is very warm outside but not humid and the wind carries a touch of salt and cools our bodies. It was afternoon and it was autumn in a place where the climate hardly changes between seasons. It wouldn’t really matter whether it was autumn or not unless you wanted to contemplate the seasons generally and try to come to terms.

We would look at the ocean and there would be a few boats and the town would not be visible behind the whitewashed balusters lining the balcony. We would only need to think about ourselves and being there because we were not really there and only thinking about it. This is always elsewhere and exterior and separate somehow and I’m always poised when I think about it from interiors.

Andrew de Freitas was educated in fine arts and philosophy at The University of Auckland, The University of Toronto, and the Mel Hoppenheim School of Cinéma in Montréal. His artwork employs a range of mediums in the exploration of issues arising from everyday perception and the ontological comprehension of reality. Experimentation with the narrative form and its capabilities remain central to his practice. He has presented works in diverse exhibition and screening contexts internationally.

One thought on “Direct Sunlight by Andrew de Freitas.”