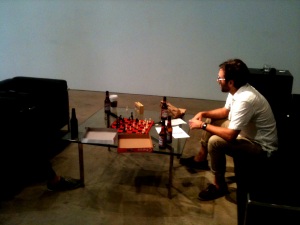 Famous for his brazen critique of the art world William Powhida asks if his presence in a gallery space is enough to qualify as a credible exhibit.  POWHIDA, on view at Marlborough Chelsea till August twelfth, strips the gallery down to nothing but the artist himself, a leather couch, two leather chairs, a coffee table, a mini fridge for beer, and a painting by Tom Sanford called “Portrait of a Genius” which shows William Powhida releasing a dove with a bottle of liquor in his right hand and a woman at his feet.

With the success of the show riding on his star power William Powhida attempted at the opening reception to grandstand presumably in parody of art celebrities.  Chauffeured in a black convertible Mercedes-Benz into the gallery whose glass facade had been retracted Powhida then commenced for the most part to drink champagne and beer on the aforementioned leather couch flanked by girls before being again chauffeured out of the gallery later that evening.

“The gallery is a world unto itself” William Powhida in the show’s press release states “a social space with a highly codified set of relationships having the formal beauty of a ballet.”

On my visit to the show I was surprised to find Powhida drinking beer and playing chess with two friends.  He was very amenable offering to pose in a photograph with me which I accepted.  Squatting just beside the portrait by Tom Sanford a man was scraping paint from the gallery floor.  Asking if I could take his picture Powhida quickly interjected saying that the gentleman was nothing more than a paintbrush and no need to ask his permission for a pic. Self-consciousness though made Powhida’s importunity unconvincing. Leaving the show I wished the artist best of luck with his endeavors.

Bad boy image aside creatively William Powhida’s talents are endless and his moxie refreshing.  With prescience his artwork has the potential to shine a more telling light on the art world than his current critical gestures strive to do. Invariably with Powhida it’s the difference between court jester and crown prince.