B.C. EDWARDS lives in Brooklyn. He is the recipient of the 2011 Hudson Prize put out by Black Lawrence Press which will be publishing his collection of short fiction, The Aversive Clause in 2012 and his collection of poetry From the Standard Cyclopedia of Recipes in 2013. His work can be found in Red Line Blues, The Sink Review, Food-i-Corp, Hobart and others. His short story “Illfit” is being adapted into a piece by the Royal Ballet of Flanders. BEN FAMA is the author of the chapbook Aquarius Rising (UDP 2009) and NEW WAVES (Minutes Books). He is the founding editor of Supermachine Poetry Journal. His work has been featured in GlitterPony, notnostrums, LIT, Poor Claudia, and on the Best American Poetry Blog, among others. He has contributed tips to gawker, words to urban dictionary, and has an ongoing correspondence with Lady Gaga. ELY SHIPLEY’s first book, Boy with Flowers, won the 2007 Barrow Street Press book prize judged by Carl Phillips, the 2009 Thom Gunn Award, and was a Lambda Literary Award finalist. His writing appears in the Western Humanities Review, Prairie Schooner, Diagram, Gulf Coast, and elsewhere. He holds a PhD in Literature and Creative Writing from the University of Utah and currently teaches at Baruch College, CUNY. Hosted by Angelo Nikolopoulos $7 cover includes a house drink. 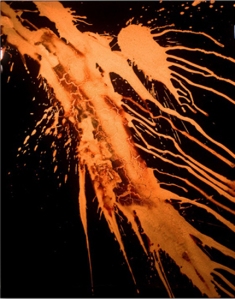 In Home Within Home, Do Ho Suh will present a series of works that reflect the artist’s ongoing exploration of themes surrounding cultural displacement and the co-existence of cultural identities, as well as the perception of our surroundings and how one constructs a memory of a space. Suh’s own feeling of displacement when he arrived in the U.S. in 1991 to study at RISD led him to measure spaces in order to establish relationships with his new surroundings. Years later, the artist developed the idea of taking these measurements and using them to replicate and transport spaces. Suh constructs these architectural spaces and the elements within them in various mediums including fabrics, resin, and Styrofoam. Among the works exhibited in this show will be Fallen Star 1/5, Home Within Home, and a series of fabric objects, all personally revealing works which invite viewers into his homes.

In his first full-scale solo exhibition, Ray Oglesby masterfully combines the line quality and scale of graffiti “writing” with other ideas and forms more proper to New York School painting and Pop art.  Of his own practice Oglesby writes, “I make use of disembodied shapes and the idea of the wall as frame, which relate to the phenomena of 1980’s graffiti in New York City when, through layer upon layer, thousands of voices condensed into an almost indecipherable cacophony of color, line, form and chaos.” In simplifying and distilling this early influence, Oglesby has created a distinctive visual vocabulary that remains as energized and animated as its origins.

Christopher Henry Gallery presents “Astral Flight Hangar”, its first solo exhibition of artist Dev Harlan. Astral Flight Hangar is an installation occupying two floors of the gallery. Harlan is a multidisciplinary artist whose hybrid practice combines the physical with the virtual. Solid geometric shaped sculptures are illuminated via 3-D mapped projections and alchemized into liquid apparitions. Through the manipulation of light moving across the planes of his surfaces, the constantly-morphing imagery creates an effect that is other-worldly and hypnotic. The physical structures serve as vessels which contain material seemingly captured from the ether. Harlan’s mesmerizing animations encapsulate a rich vocabulary of art history: alternating from arresting black and white stripes and optical patterns, to bold pop graphics, to therapeutic subtle gradations of color. WATCH VIDEO.

Like the Spice Gallery proudly presents a new series of paintings, entitled This House of Glass, by Reuben Negron. Watercolor, Negron’s choice of medium for his second solo exhibition here at Like the Spice, is known for it’s fragile and unforgiving nature.  This medium, a constant exercise in self-control and impending chaos, is the perfect choice for Reuben’s current series in which he reaches beyond coupling, extending his focus toward introspection and the complexities of personal intimacy. This House of Glass asks you to leave your stones at the gallery door and step into the lives portrayed in these paintings.

For his first solo exhibition at Fleisher/Ollman, Nick Paparone presents Accents for the Self-Made Man, the second iteration of an evolving work that anatomizes the “branding” of persona in this American moment. Working with the systems of mass culture and marketplace, Paparone isolates various signs, objects, opportunities and attitudes in an exhibition that is complete with goods, marketing collateral and a series of PowerPoint presentations.

The artist Loren Munk is known for his cubistic paintings that combine urban imagery with exhaustive historic research, complex systems of thinking and painterly finesse. Since his SoHo debut in 1981, Munk has overseen an international career that includes exhibitions throughout the United States as well as Brazil, France and Germany. Most recently, Munk has been producing a series of paintings that tackle the subject of art itself through a historical and diagrammatic lens. In addition to his studio work, Munk is also a writer and curator. In his role as the Uber-chronicler of the New York art scene, Munk is known by his alias, James Kalm. Through his famed online video program, The Kalm Report, Munk tours artist’s studios, gallery exhibits and art world events throughout New York City.

This month, Puppet Playlist is back in Kodachrome. Join us as we take on Paul Simon & Art Garfunkel. Perhaps just Simon. Just Garfunkel? Simon and/or Garfunkel. Playlist has a new (temporary) home! The TADA! Theater at 15 West 28th Street (between Broadway & 5th Ave) 3rd Floor. Puppet Playlist takes brilliant puppeteers and talented musicians and slams them together into an evening of live theater to stir the senses. This Playlist will feature original works of puppetry inspired by the songs of Paul Simon and/or Art Garfunkel, mixed with live musical interpretations by some of New York’s most exciting young singer-songwriters. eaturing Pieces By: Taylor Bibat, Deborah Hertzberg, Jon Levin, Peter Musante, Cathy McCullough & Jodi Eichelberger, and Eric Wright With Original Music By: Franz Nicolay, The Debutante Hour, Anna Leuchtenberger, Dr. Charles A. Booth, and Jo Williamson.

Jeff Bailey Gallery is pleased to present Kris Chatterson, New Paintings. This is his first exhibition with the gallery. Chatterson’s abstract paintings evoke vast, ever-changing and unfamiliar spaces. In a multi-step process, he combines images from his earlier paintings with layered patterns that he creates on a computer or smart phone. These are manipulated, distorted, then printed and transferred to a painted surface (where he continues to paint and build the overall image).

The Brick, presenter of the blockbuster New York Clown Theatre Festival in 2010 (and returning in 2012!), does not want fans of Clown Theatre to go hungry in the meantime. This September The Brick presents its biennial Amuse Boucheselection of outstanding Clown Theatre work: 9 Mainstage shows, 3 cabarets, clown films and classes, with performers from Australia, Canada, Mexico, and the far corners of the U.S. of A.!

Like the quotes gathered here, the seven artists featured in Crazy Lady–Lizzi Bougatsos, Robert Beck, Kathe Burkhart, Daniella Dooling, Lisa Levy, Genesis Breyer P-Orridge, Stephanie Snider-reflect many perspectives on the trope of the madwoman in western culture. Humorous, painful, reflexive, historical, the diversity of their voices is intentionally cacophonic, conveying the pathology of the stereotype itself, and its impact on women in all its endless derivations-hysteric, nympho, spinster, harpy, cat lady, witch, bag lady, wannarexic, etc.

The Charles Bank Gallery will present a selection of Keever’s acclaimed large-scale photographs of imaginary landscapes, as well as his new Eroded Man and Shell Man series of submerged heads lost in time. Keever is well-known for his unique set-up photographs created by meticulously constructing miniature models in a 200-gallon tank, which he then fills with water and disperses pigments to produce ephemeral atmospheres that he must quickly capture.

You are invited to invited to attend a dress rehearsal of Another Life at Gerald W. Lynch Theater at John Jay College (in Manhattan) on Thursday, 9/8 at 7:30 pm. There will be a Guantanamo Lawyers Panel at 5 pm in the theater lobby. Admission is free to both events.