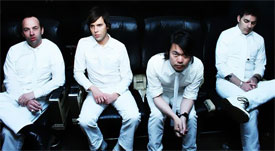 Described as maintaining a “rightful place at the crossroads of the shoegaze and post-punk revival” Astral’s 2011 release, “Forever After” from Vibraphone Records feels like a fast ride through a field full of flowers. The band currently lives in San Francisco and frontman, Dave Han took a moment to talk to Matt Mowatt about the project.

Matt Mowatt: I’d like to thank you for having an interview with 22 Magazine.  I would have liked to interview the band in person. In fact, do you have any plans to tour Paris anytime soon?

Dave Han: No immediate plans to tour Paris soon, however I may be travelling there later in the year for pleasure. Touring Europe is definitely on the radar. Our most significant support is in Germany, Italy, and Spain, but it would be hard to refuse a date in France.

Matt Mowatt: I think the name of your band is fitting. How did you form?

Dave Han: The band was formed from a coalescence of our liked minded drummer Shawn Poh, bassist Amy Rosenoff, and myself. Influences aside, we felt our sound at the time filled a void that had yet to be tapped.

Matt Mowatt: Your music has been accurately compared with My Bloody Valentine and Slowdive. Were you originally influenced by these bands? Was there a particular band that caused you to create your own?

Dave Han: They were definitely one of the many influences of ours, but it would be unfair to titrate it down to one particular influential band. Our sound is really a hybrid of shoegaze (My Bloody Valentine, Slowdive, etc) and post-punk (Joy Division, Cure, Echo & the Bunnymen), something that we didn’t really see going on in the early 2000’s.

Matt Mowatt: Have you seen an evolution in your music in the last couple of years? Were there any significant changes?

Dave Han: Certainly, our sound evolves from album to album. we’ve been putting out albums about three years apart and a lot happens in between. Particularly, changes in band members, creative direction, and ideals.

Matt Mowatt: What is the process, for you, in producing music?

Dave Han: Our writing process is very organic and based on the feel of a song or theme. I feel it’s critical for any artist to grow and change to keep the creative edge fresh. Only recently have we started exploring digital production. For years we have been committed to analog recording, but there are no hard and fast rules about music production these days.

Dave Han: One of our favorite tours was with Sciflyer (Clairecords). It was sort of a West Coast thing, but they are dear friends of ours and it’s somewhat of a party on wheels. Good times for sure!

Matt Mowatt: If you had the choice, who would you tour with at the moment?

Dave Han: It’s hard to say. We are going through some creative directional changes at the moment. We have been branching a bit more into electronic music, so I’m inclined to say bands like Massive Attack or Portishead would amazing bands to tour with.

Matt Mowatt:  I’ve never been acquainted with the San Francisco music scene, but I’m curious to know if there’s an underground of dream pop groups around the area or did you form the band in a sort of vacuum, separately from what was happening in the San Francisco area around 1999/2000?

Dave Han: There has always been a low profile dream pop music scene here in San Francisco, but we really felt we were onto something, and then things really started to catch on with bands drawing on shoegaze and 80’s post-punk influences.

Matt Mowatt: Do you have any new projects in the works?

Dave Han: I have a few side projects going on, the most recent one is a trip-hop/ shoegaze band called Foreign Cinema with Brazilian bassist/ songwriter, Natalia Silva. Aside from that, I have a solo project called Venus Beltran, which I only dabble in occasionally.

6 thoughts on “An Interview with Astral by Matt Mowatt.”