MoMA Premiere: Through the Weeping Glass: An Evening with the Quay Brothers
September 24, 2011

As part of a limited three-city tour that includes premieres in Philadelphia and Los Angeles, MoMA presents the Quay Brothers’Through the Weeping Glass: On the Consolations of Life Everlasting (Limbos & Afterbreezes in the Mütter Museum), a new work by the American-born, British-based independent filmmakers. In the tradition of their prior museum documentaries—The Phantom Museum (2003), on London’s Sir Henry Wellcome Collection, and Inventorium of Traces (2009), on Poland’s Lancut Castle—the Quays return to the city where they began their education as graphic designers to explore the medical collections of the Mütter Museum, part of the College of Physicians of Philadelphia. Examining obscure archives, antique volumes, and artifacts, Through the Weeping Glass investigates marvels of pathology and anatomical oddities, finding poetry in the ill-fated, true-life stories of the “ossified man” Harry Eastlack and famed Siamese twins Chang and Eng Bunker. The documentary Behind the Scenes with the Quay Brothers, shot during production ofThrough the Weeping Glass, also premieres. Directors Stephen and Timothy Quay will be present to discuss the film with writer David Spolum and moderator Barbara London.

California-based fiddle, guitar, and banjo player, and ardent 78 collector Frank Fairfield has made his living as a musician, often found playing on the streets of Los Angeles. Handpicked by Fleet Foxes to open their U.S. tour last year, Frank released a 7” on Tompkins Square and recorded his self-titled debut album. His music has won over tough critics and purists like Grammy winning producer Chris King (Charley Patton, People Take Warning box set), Phil Alexander (Mojo) and Greil Marcus, to name a few. Jerron “Blind Boy” Paxton will be joining Frank for his set. He is a young musician from South Central area of Los Angeles who plays banjo (five and six string) guitar, harmonica and several other instruments in the pre-war American style. 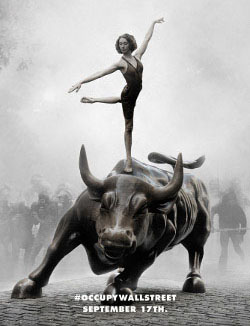 On the 17th of September, we want to see 20,000 people to flood into lower Manhattan, set up beds, kitchens, peaceful barricades and occupy Wall Street for a few months.

Like our brothers and sisters in Egypt, Greece, Spain, and Iceland, we plan to use the revolutionary Arab Spring tactic of mass occupation to restore democracy in America. We also encourage the use of nonviolence to achieve our ends and maximize the safety of all participants.

Who is Occupy Wall Street? Occupy Wall Street is leaderless resistance movement with people of many colors, genders and political persuasions. The one thing we all have in common is that We Are The 99%that will no longer tolerate the greed and corruption of the 1%.

The original call for this occupation was published by Adbusters in July; since then, many individuals across the country have stepped up to organize this event, such as the people of theNYC General Assembly and US Day of Rage. There’ll also be similar occupations in the near future such asOctober2011 in Freedom Plaza, Washington D.C.

Shea Hembrey’s spellbinding biennial, Seek, showcases 100 artists from around the world, all of whom were imagined by Hembrey himself.

SHEA HEMBREY grew up in rural Hickory Grove, Arkansas in a family of farmers, factory workers, hunters, trappers, musicians, and cockfighters. Though he has developed the majority of his craftmanship skills on his own, he has a varied formal art education, including an MFA from Cornell University and a year studying Maori art in New Zealand. His studio is now based in a sleepy town in New Jersey.

Please join us on Monday September 19 for a return performance by New Orleans-based cellist, vocalist, songwriter and improviser Helen Gillet.
John Swenson, legendary music journalist and the author of New Atlantis: Musicians Battle for the Survival of New Orleans will be there to chat with Helen, and to read from his book. Afterwards there will be a DJ’d New Orleans dance party, and book signing.Helen Gillet is a Walloon born in a Flemish hosptial. Raised in Singapore, Belgium, Illinois and Wisconsin, Helen landed in New Orleans in 2003. Helen threads her tri-continental childhood web into her performance, notably with the instrument she picked up at age 9: The Cello. Recent collaborations have included working with Leroy Jones, Cassandra Wilson, Mark Southerland, Clint Maedgen, Marianne Faithful, Ed Sanders, Georg Graewe to name a few.
THE CREATIVE TIME SUMMIT: LIVING AS FORM
Friday, September 23, 10:00am–6:30pm

The Creative Time Summit is an annual conference that brings together cultural producers to discuss how their work engages pressing issues affecting our world, and features the bestowal of the third annual Leonore Annenberg Prize for Art and Social Change. For more information, please visit creativetime.org/summit.

Fowler Arts Collective presents YEAR ONE, a group exhibition of Fowler’s resident studio artists. This exhibition marks our one year anniversary, and we wanted to take the time to celebrate the amazing year of growth Fowler has experienced thanks in large part to the artists working in our studios. We simply would not exist without this group of talented, kind, and kick-ass artists. 22 artists have filled the gallery with work …of all mediums including photography, painting, drawing, sculpture, and illustration.

The event on Friday, Sept. 23rd, will also be a fundraiser (in addition to our campaign on IndieGoGo.com) to benefit Fowler and its hard-working group of artists. At the end of the evening, we will hold a raffle of prizes donated by amazing local businesses. Below, check out the awesome Greenpoint restaurants and businesses that have donated prizes! Raffle tickets are only $10 and will be available to buy in the gallery. As an extra perk, anyone who donates to our IndieGoGo campaign before the event and attends on Sept. 23rd, will receive a free raffle ticket! NOTE: entry is FREE – no raffle ticket purchases required! All proceeds from artwork and drink sales will go towards fixing our heating system before the cold, snowy winter arrives.

Sprawl is an open edition of live drawing installations hosted at Devotion Gallery which aims to create a momentary graphical map of an intersection between creative improvisation and substructure. Edition one features Sougwen, David Last and Margaret Schedel. Using chalk for its approachable immediacy, Sougwen and David Last improvise an expanding thicket of abstract organic forms, reminiscent of bits of plants, animals, smoke, nerve clusters or rivers seen from the air. Noting the paradox that a limiting structure can provide the most open sense of creative freedom, a faint structure based upon projections of computer-randomized forms is applied to the wall before the performance. The artist’s role within this system is to react to the moment, through both visual creative urge and sound inspiration; while using the landscape of pre-defined random activation as a method of sparking inner dialogue. The human mind, being a pattern recognition machine, pulls relationships and structures out of chaos, and the line-sprawl expands like ivy across the walls and ceiling of the space.

Renowned performance artist and scholar and Location One’s 2011-2012 Senior Artist-in-Residence, Pablo Helguera, will launch his most ambitious full-year project on September 21: The Well-Tempered Exposition, a series of 24 events in which he and changing groups of musicians, artists and performers wlll translate Johann Sebastian Bach’s legendary masterpiece into works of performance art.The series, which begins September 21 at Location One, will visit multiple venues and involve scores of participants before its conclusion next summer, also at Location One.The project will launch with a workshop of creative participants leading to a performance that includes performance of the focal “Clavier” pieces by concert pianist Beatriz Helguera before the performance. Exposition of the creative process behind the “translation” will be woven into the performance.

Legendary poet Anne Waldman will present a recital of new and selected pieces, including poetry selections from her new book, The Iovis Trilogy: Colors in the Mechanism of Concealment, a 1,000 page montage epic taking on issues of war and patriarchy, just published by Coffee House Press. She will be joined by celebrated cellist and composer Ha-Yang Kim with whom she has recently performed in Marrakech and Paris, and with her son Ambrose Bye, a frequent collaborator who has designed breathtaking soundscapes for her.

Dana Levin is the author of Sky Burial (2011), Wedding Day (2005) and In the Surgical Theatre (1999), which won nearly every award available to first books and emerging poets. Levin has received many fellowships and awards, including those from the Rona Jaffe, Whiting and Guggenheim Foundations.

As part of his first US tour, Brazilian artist Michel Groisman brings two singular pieces and several interactive and intimate experiences for children and adults to the Invisible Dog Art Center in Boerum Hill, Brooklyn.

By devising wearable apparatuses and sculpting his body to test the endurance and nature of the solitary human form, Groisman’s soulful performances and investigative group experiences challenge preconceptions of performance and play on the values of confidence and exchange.

The transdisciplinary festival of contemporary arts and culture is a platform for vibrant new developments in artistic practices on both sides of the Atlantic. Each fall, the month-long festival provides opportunities for New Yorkers to explore the dialogue between artist and society, to examine how artists help re-imagine the ways we perceive the world, and to engage with the vital role artists play as critical thinkers and catalysts for social evolution.

features a wide variety of actions, participatory performances, theatrical presentations, public installations, and small and large-scale interventions all of which revolve around the concept of ritual.

A ritual is generally defined as a series of established actions that are carried out in private or public spaces, by individuals or by groups, for their spiritual, social, or political significance. Tapping into the everyday significance of these habits, the artists in AiOP 2011: RITUAL continuously integrate these practices in their work to explore a broad range of issues in contemporary life such as politics, culture, religious beliefs, notions of individuality and community, the endurance of the body and the fragility of life, the relationship with nature, among many others.

Paul Kasmin Gallery is pleased to present an exhibition of photographs by Polly Borland from her Smudge series, curated by Danny Moynihan. Opening on September 22, 2011 at 511 W. 27th Street, this will be the artist’s first show with the gallery.