If you are anything like me, you frequent Chelsea gallery openings and supposedly avant-garde art parties only to leave completely disappointed and weirdly nostalgic for the old New York art scene.  What would it be like to see Ann Magnuson, Kenny Scharf and Keith Haring at Club 57, hang out with Andy and Edie at the Factory or watch one of those bizarre, inexplicable Fluxus performances in SoHo before it was an open-air mall? Well, its time to stop that nonsense whining because a raw, inclusive, totally wild, D-I-Y art show is happening now. Michael Alan’s Living Installation has its roots in that glorious art scene that everyone seems to believe has passed.  Rather than endure another self-involved and nearly delusional Terence Koh or Marina Abramovic performance, art enthusiasts need to wake up and experience the unexpected and nearly unexplainable Michael Alan’s Living Installation, which they did at “The Wedding/Vampire Circus,” which featured two shows at one time, on Friday at legendary punk-art venue ABC No Rio.

Not a play, a performance, a show or a happening per se, Michael Alan’s Living Installation is an art piece where artist Michael Alan turns a group of performers into living art objects, using every material he can get his hands on. A native New Yorker, Alan has distilled the New York art and culture he grew up in and created an entirely new, crazy experience that runs about 6 hours. From paint to glue to baby powder to wild masks made from doll parts, pieces of paper and toys, the appearance of the performers begins to look like an experimental fashion photo-shoot, which is probably why Marie Claire Italy was one of the magazines excited about the Living Installation rather than the ancient, conservative art journals.

As Alan builds on the performers almost like a ringmaster or director, the performers move, often very slowly, in a choreographed surreal and dream-like way. Even though it appears differently, each performer has a set motion and character.  Often riffing on fairy tales or children’s books such as Where the Wild Things Are, there is a storyline despite how hidden it might be. Performing at spaces from ABC No Rio, which may not be around in its original form much longer, to Kenny Scharf’s Cosmic Cavern to the Gasser Grunert Gallery, the performers begin to merge with the space surrounding them, slowly receding to the walls as the paint drips down their faces and bodies.

In addition to artistic inspiration, the Living Installation is a chance for Alan to present his art to a wider public. As Alan said, “Whereas someone might not be able to own a painting, they can come to a show and experience something in themselves.”  The Living Installation brings everyone from artists sketching to club kids to the wealthiest gallery owner to a kid from the projects.  Much like Keith Haring drawing with chalk on the subway posters, Michael Alan’s Living Installation is all about accessibility of art.

At first glance, one might think the Living Installation is just some hippie happening, where everyone is covered in paint.  But that would be wrong.  It’s a raw, sometimes terrifying but on the whole, a positive celebration of life and all the changes that it entails. In all of Alan’s art, change is an essential concept, particularly representing the movement and change in our bodies and emotions.  Working with live performers in The Living Installation means that every moment in The Living Installation will never be repeated. That one moment of glue dripping on a seated performer’s head will never happen like that again.  Speaking as a viewer of four Living Installations, this emphasis on the moment and change is completely translatable to the audience. It’s a completely immersive experience, which is lacking in the usually self-referential art world.

So, where is PS1, the Kitchen, the New Museum? Michael Alan’s Living Installation is something that is happening right now that will be yearned for in twenty years.  Electrifying and revitalizing, Michael Alan’s Living Installation provides the kick in the ass the New York art scene really needs and the art world, in general, seems to be missing it.

Next Show:  DANCE TILL YOUR DEAD : REINVENTING YOUR PROM
Sat, November 5th, 7PM – 12AM, Gershwin Hotel 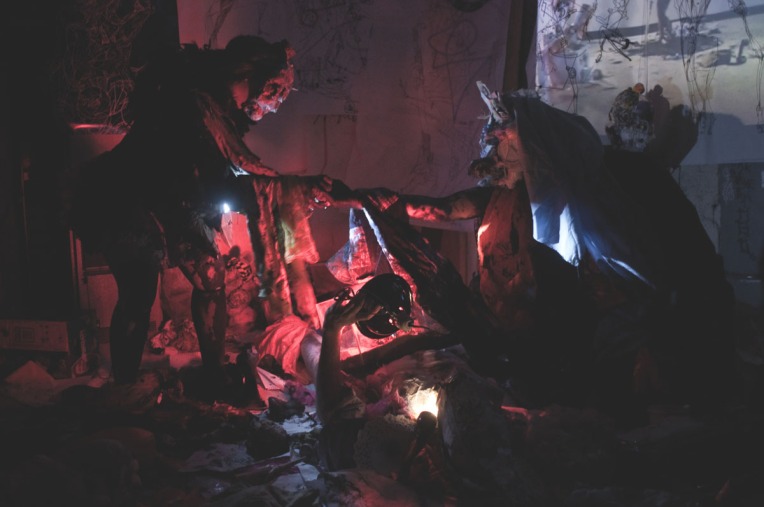 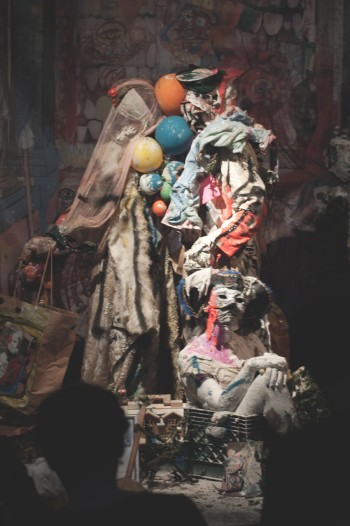 Raquel Mavecq, Emil B Nasty and Miss Suzie Q in The Wedding, Photo by Worm Carnevale 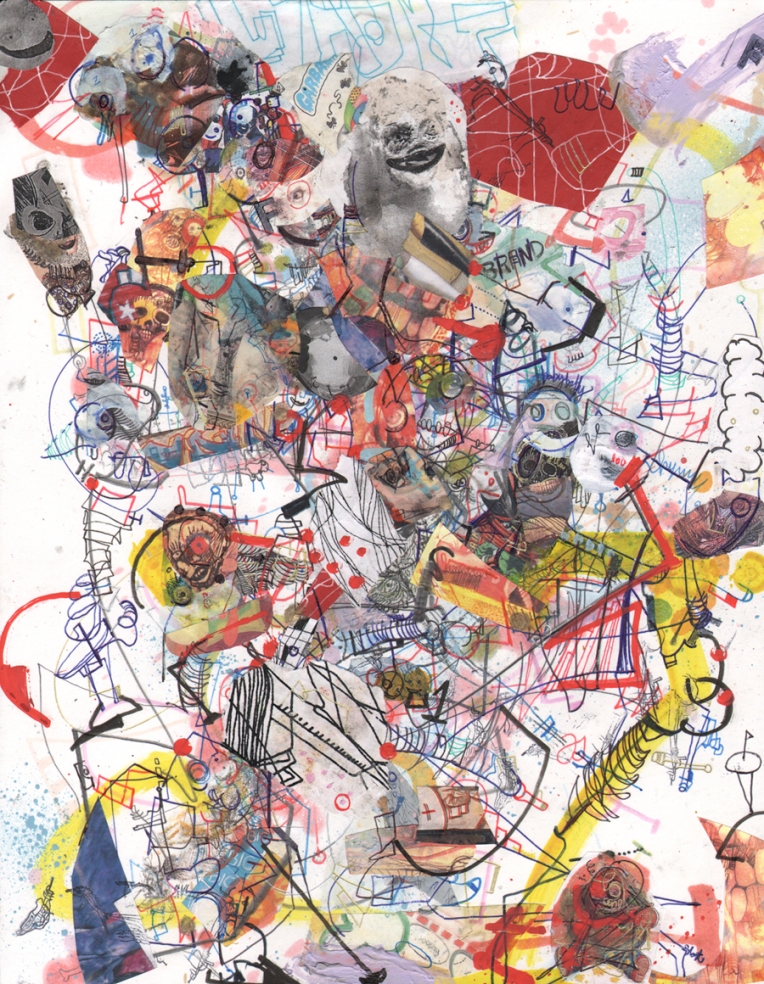 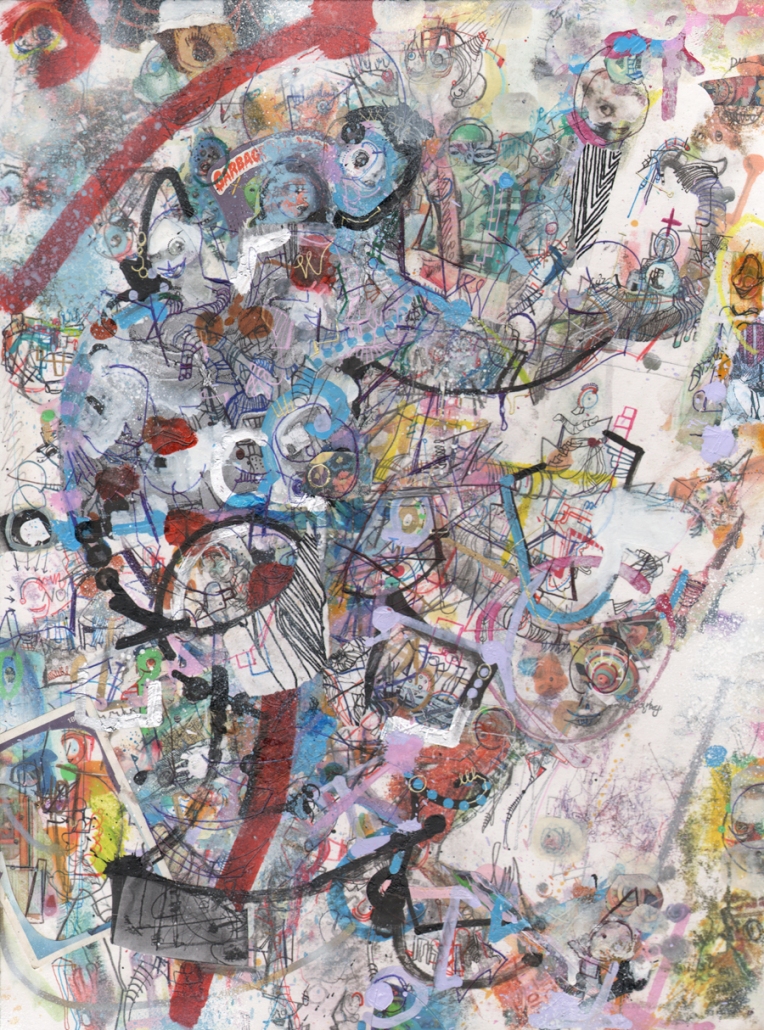