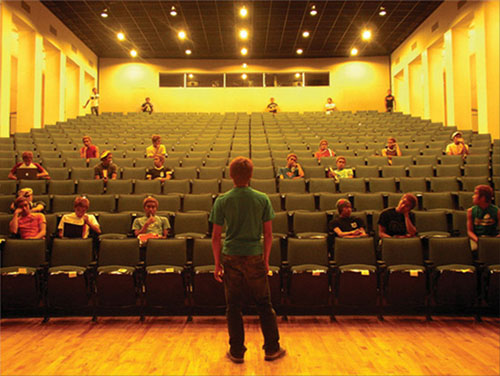 Carolyn Supinka: You were “born, baptized, and raised in New Jersey, USA to Filipino parents.” You then received a B.F.A. from Carnegie Mellon University and an M.F.A. from San Francisco Art Institute. Do you continue to live and work in San Francisco?

Jeffrey Augustine Songco: Yes, I live and work in San Francisco. I was living in Bushwick, Brooklyn for a couple of years and then I moved out to San Francisco in 2009 to attend SFAI. I told all my friends in NYC that I would be back in two years after I graduated, but somewhere in those two years I fell in love with the city. Whether it was luck or fate or personal determination, a few weeks after my graduation, I began an awesome relationship with Steven Wolf of Steven Wolf Fine Arts and within eight months, I had my first solo show at his gallery. I started blogging for The Huffington Post and now I work at a tech startup right around the corner from Steven’s gallery. I’m really happy producing artwork and being creative in SF, especially with the amazing support from my family on the east coast, friends on both coasts, and art colleagues in my community here in SF. Now I just have to find love with a dude or buy a dog and everything will be as close to perfect as it can be. 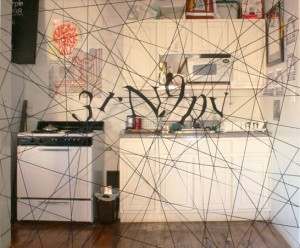 CS: Your alter-ego, Gus 23, lives on the internet. He claims that “The world is too round and smells weird.” How was Gus 23 born? Why does he exist?

JAS: On the first day of a ceramics class my sophomore year of college, the professor was taking attendance and I remember turning to my friend, Annie, and saying, “oh my God, I should go by a different name.” Annie and I quickly brainstormed and my middle name (Augustine) came up and she yelled out, “GUS.” So my prof called me Gus from then on. Around this time I was starting to brand my online identity through my artist’s website, which one could say that ten years ago was a pretty weird but emerging idea. I think back then there was still a feeling that “online” was associated with “robot” and “technology” rather than today’s feeling of a more seamless transition from human self to digital cloud. Ten years ago, I felt it was necessary to have an online identity pseudonym very much like I had an AOL screen name when I was in middle school. To me, that pseudonym had to be kind of a cliché robot thing that included numbers like R2D2 or Johnny 5. If that all makes sense, then it seems totally obvious that I would couple my new fictional name “Gus” with my birthday and boom, you got Gus23. As I started working more and more with digital media, I realized that I had uncovered a new interest in art making, but I was still interested in other things unrelated to digital reality. So for several years, I had split my artistic identity and gave Gus23 the job of working with digital and online concepts.

CS: A lot of ‘his’ artwork seems to address how self-image and identity are transformed by the online world. How do you think the Internet has affected our perception of ourselves?

JAS: I think Gus23 is simply extending some of the ideas brought forth by Andy Warhol in terms of celebrity. A celebrity is a person who is “well known” and the Internet seems to breed these types of people. Even if you or me or that guy sitting over there isn’t an international celebrity like Madonna, chances are that if we’re “online”, we have an online community on Facebook or Twitter where we are known enough that we think that what we have to say is important and influential. When we feel like celebrities within our own circles, we begin to behave in strange ways through digital sharing: a pic of a garnished Bloody Mary from brunch, tagging friends at the brunch table, and exclaiming how awesome this alcohol is right now. Who behaves like this? Consequently, who enjoys consuming this information? American pop music lyrics seem like a great documentation of these kinds of present perceptions born out of the kind of Internet that Gus23 subscribes to. “Pictures of last night/ ended up online/ I’m screwed/ oh well/ it’s a blacked-out blur/ but I’m pretty sure it ruled/ damn.” –Katy Perry’s “Last Friday Night”

CS: Identity is a recurring theme throughout your work. You are present in many of your pieces, acting simultaneously as a separate character and as a self-portrait of the artist. When did you start inserting yourself as a character in your own work?

JAS: As cheesy as it sounds, I’ve been doing it since my art classes in elementary school. My parents have saved every work of art I’ve ever made ever, so if you visit New Jersey sometime, you can see my identity in everything from pencil drawings to linoleum prints to Emo-teenage collages to all the digital photography stuff that takes up most of my artist’s website. My favorite anecdote about inserting myself in my own work is simple: in college, my friends were just too busy to pose for me so I ended up posing for the camera myself. The process of photographing myself has always been rewarding because it brings me to a place of performance, and for me, performance is everything. 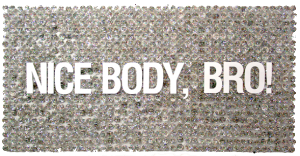 CS: The range of materials in many of your installations is a blend of religious paraphernalia and a party atmosphere: communion wafers and pages of the bible mixed with balloons and glitter, and text such as “Nice Body, Bro!” Were you raised as a Catholic, and are you practicing? How has this influenced your work?

JAS: Like you said earlier, I was born, baptized, and raised in New Jersey. My parents are Filipino and Catholicism is a huge part of Filipino culture. I went to Catholic school for a few years before transferring to a public school. I did the whole altar boy thing and performed all the sacraments a Catholic kid can perform. I am still a practicing Catholic but I’ve had to adopt my own personal dogma, as my homosexuality is contrary to the Church’s teachings. This supposed negotiated space between Catholicism and “queerdom” (as Steven Wolf would say) is apparent in a lot of the work I do now. There’s a back-and-forth and push-and-pull that occurs with meaning and language. An example of this is “Nice Body, Bro!” which is a grid of sparkling glittery discs that attracts you towards it, but when you learn that the discs are actually communion wafers, or the Body of Christ, and you most likely think “What the fuck?” Another example is “man’s best friend (puppy piñata)” which is a fun and normal looking piñata in the shape of a dog that happens to be made out of shredded bible pages. 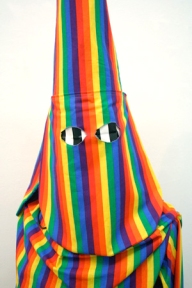 CS: In one piece, you transform the Ku Klux Klan’s traditional uniform with rainbow stripes, turning it into the uniform of “GayGayGay robe.” What inspired this piece?

JAS: I think the people who find resonance with this piece are the people who would most likely understand its origin. I’m very public and confessional about my self-awareness and so it shouldn’t be a surprise to hear that my own self-hatred was most superficially the inspiration for this piece. Just like I mentioned before, being Catholic and gay is an identity that takes a lot of negotiation. Sometimes the scales will tip and I hate myself for being Catholic because being gay is way more important, and sometimes I’ll hate myself for being gay because being Catholic is way more important. There are a lot of things I hate about myself, so I’m really happy that the stars aligned when they did and I somehow managed to create an icon for this self-deprecation. Also, at the time I created “GayGayGay robe,” I was working with secret groups like fraternities as well as working with the rainbow color scheme, so the KKK robe in rainbow stripes was almost a natural phenomenon for me. In 2005, at the end of undergrad, I created a secret society known as the Society of 23. It’s a secret brotherhood of 23 guys. I happen to play all those brothers. Among other things, I photograph myself 23 times in different poses to create a really extensive visual narrative of dudes doing weird things. Six years later, I was still working with the Society of 23 and after I created “GayGayGay robe,” I realized that this robe was most suited for a brother of the Society. In fact, I believe that “GayGayGay robe” is the brotherhood’s ritual robe. When I create the Society’s narrative, I appropriate the culture of American society itself. So if I had to pinpoint a mission for the wearer of this robe, I would say that it is the mission of every American: life, liberty and the pursuit of happiness.