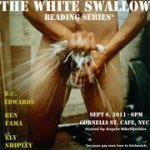 B.C. EDWARDS lives in Brooklyn. He is the recipient of the 2011 Hudson Prize put out by Black Lawrence Press which will be publishing his collection of short fiction, The Aversive Clause in 2012 and his collection of poetry From the Standard Cyclopedia of Recipes in 2013. His work can be found in Red Line Blues, The Sink Review, Food-i-Corp, Hobart and others. His short story “Illfit” is being adapted into a piece by the Royal Ballet of Flanders. BEN FAMA is the author of the chapbook Aquarius Rising (UDP 2009) and NEW WAVES (Minutes Books). He is the founding editor of Supermachine Poetry Journal. His work has been featured in GlitterPony, notnostrums, LIT, Poor Claudia, and on the Best American Poetry Blog, among others. He has contributed tips to gawker, words to urban dictionary, and has an ongoing correspondence with Lady Gaga. ELY SHIPLEY’s first book, Boy with Flowers, won the 2007 Barrow Street Press book prize judged by Carl Phillips, the 2009 Thom Gunn Award, and was a Lambda Literary Award finalist. His writing appears in the Western Humanities Review, Prairie Schooner, Diagram, Gulf Coast, and elsewhere. He holds a PhD in Literature and Creative Writing from the University of Utah and currently teaches at Baruch College, CUNY. Hosted by Angelo Nikolopoulos $7 cover includes a house drink.

END_OF_DOCUMENT_TOKEN_TO_BE_REPLACED 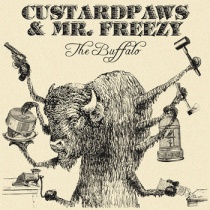 Go to the Custardpaws & Mr. Freezy page on Bandcamp to preview and purchase the album:Custardpaws & Mr. Freezy (a.k.a. Blair Wells and Jeff Badger) have reunited to release The Buffalo, the followup to our self-titled LP recorded way back in 1999. The new album was recorded over two weekends in 2010 and features fourteen songs that span from sun-drenched psychedelia to gritty punk to earnest folk to synthy-dance-pop, all rendered in the (soon-to-be-considered) classic CPMF style.

http://custardpawsandmrfreezy.bandcamp.com/. There will also be CDs of The Buffalo available with hand-made paper covers and liner notes (made from real trees) and hand-burned CDs (made from real silicone). If you would like one of these send me an email. jeff [at] jeffbadger.com