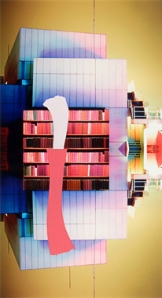 Like the Spice gallery presents Cross-Reference, a collaborative of Nashville-based painter Hans Schmitt-Matzen and Brooklyn-based photographer Gieves Anderson. It’s fitting that Hans and Gieves begin the works in their latest series in libraries, which the two artists consider sanctuaries of thought. Duly titled Cross-Reference, the series enables a philosophical contemplation of color and composition through an alchemy of the disparate mediums of photography and painting. Libraries’ unbroken rows and columns of books were the artists’ inspiration for the new works, and Gieves’ large photographic prints of the buildings’ interiors and exteriors form the multicolored surfaces to which Hans applies oils in thick gestural strokes made with brushes, blades, and customized squeegees.

Causey Contemporary is pleased to present two solo exhibitions this April, New Paintings by Marc Brotherton and Acid Bath by Nina Carelli. Marking his third solo exhibition with the gallery, Brotherton will present his newest series of bold, mixed-media paintings, which explore ideas of new technology, communication, color and design. Marc Brotherton contends that living in the twenty-first century, we are constantly bombarded by input– be it from televisions, news sources, the internet, or one of the many communication gadgets. In a way, Brotherton’s paintings are a form of communication, which address technological and political quandaries, but also banalities of daily life. The outcome of his work is a materialized investigation into the perplexing world in which we live. Brotherton states that his incentive to make art comes from an “…inner curiosity, a personal necessity to acknowledge an awareness that we are here together inhabiting an increasingly chaotic world.”

END_OF_DOCUMENT_TOKEN_TO_BE_REPLACED

At 7:30 p.m. on Sunday, April 3 Degenerate Art Ensemble will reprise their work performed at Watermill, but this time in the Williamsburg section of Brooklyn at CPR – Center for Performance Research. Click HERE to read more about the event and purchase tickets.

Red Shoes On April 1 at The Watermill Center and April 3 at CPR – Center for Performance Research, Degenerate Art Ensemble (DAE) will present public performances of their work in progress titled Red Shoes. Red Shoes reimagines Hans Christian Andersen’s tale of a girl who is cursed to dance herself to death as a punishment for following her creative desires. DAE describes their work as ‘live music driven, comedy / horror, butoh inspired physical theatre.’ Their performance will utilize the musical talents of local East End musicians and will explore audience involvement in both the creation of soundscapes as well as choreography in portions of the piece. Their residency at Watermill is focused on the completion of one of the chapters of Red Shoes which is set to premiere at Seattle’s Frye Art Museum in May 2011. With limited opportunity to hold full rehearsals in the actual performance sites in Seattle, they will use the residency as a testing ground. Museum locations include a forest, a body of water, a field, and an indoor exhibition space – all spaces that exist on or nearby the Watermill grounds.

Degenerate Art Ensemble Degenerate Art Ensemble is a performance company that creates original and adventurous productions using live music, physical theater and the visceral language of Butoh dance. Audio elements include live foley art, orchestras/chamber ensembles, bands, newly invented instruments, and electronics. Their creative approach is intensely collaborative and is in a constant state of invention and re-invention. Aesthetically extreme, influenced by punk, protest, cartoons, nightmares and fairy tales, DAE takes the viewer into otherworldly landscapes — full of compelling characters and music that doesn’t just accompany the action, but defines the mental state and reveals secrets to the audience that the characters will never know. DAE’s work is a tightly wound mechanism made up of triggers and cues that when released on stage aims to achieve a heightened sense of awareness one might find in a sacrificial rite. DAE has been presented by On The Boards (Seattle), REDCAT (L.A.), New Museum (N.Y.), Festival Alternativa (Prague), T.F.F. Festival (Germany) and many others in ten countries of Europe and North America. DAE has garnered acclaim with more than five hundred concerts and performances in ten countries. It has explored a diverse variety of formats, including music, dance, theater, film scoring, recording, sculpture, and painting in over one hundred original performative works and nine commercial music recordings. The group has received commissions from On the Boards, Commissioning Music USA, and the Aaron Copland Fund, and will be in residence at The Watermill Center a Laboratory of Performance. DAE is currently the subject of a large scale touring museum exhibition at the Frye Art Museum in Seattle, Washington. www.degenerateartensemble.com