Their sound is a re-invention, a nostalgic throwback to a time and place mostly imagined where Peruvian waltzes, Andean huaynos and Cuban Guajiras mix with French opera, Cowboy tunes and Bollywood classics. The result plays like a dreamy soundtrack with classical harmonies set to a Latin beat. Their new album, Ziguala is an attempt to imagine what a pop record would sound like had the global Latin influence which was so prevalent until the early 60’s had continued its course without interruption. The tracks on the album are re-interpretations of songs from Spain, France, Peru, India, Mexico, Greece, Venezuela, Colombia and Naples. Ziguala is not so much a latin record as it is a pop record that uses a latin vocabulary. Think of it as the opposite of Rock en Español, itself a Latin genre which uses a rock vocabulary.

Upstairs at the Square with CHERYL STRAYED AND THEO BLECKMANN
Barnes and Noble
August 2, 7pm

Barnes & Noble, Inc. today announced the next edition of “Upstairs at the Square,” described by Daily Candy as “an awesome literary salon on a date with an intimate rock concert,” at the Union Square Barnes & Noble in Manhattan (33 E. 17th St.). On Thursday, August 2, at 7.p.m., Cheryl Strayed, author of Tiny Beautiful Things (Vintage Books, July 10) and Theo Bleckmann, whose latest album is Hello Earth! – The Music of Kate Bush (Winter & Winter, March 13), join Katherine Lanpher to discuss and perform their work. Admission is free, and no tickets are required.

Exploring the body as a conduit for transformation, Cori Olinghouse will present excerpts from her latest Ghost lines Project.  Inspired by ghost towns, silent era clown films, voguing, and eccentric dance, the characters in Ghost lines conjure a vaudevillian past as traces – remnants; as if rising from the dust, transmitting signals of light and shadow.

Basak Yavuz is a Turkish-born, New York City based vocalist, composer and arranger. From modern jazz to minimalism, from blues and world music to chromatic harmony, her music is eclectic, heartfelt, and has the just the right amount of biting honesty. Her songwriting covers the full range of human experience; it can be fragile or aggressive, beautifully simple or deceptively complex, and always tells a compelling story. She recently graduated from Manhattan School of Music, where she studied with Peter Eldridge, Theo Bleckmann, and Darmon Meader, Dave Liebman and Phil Markowitz. She was the winner of the Nardis Jazz Vocal Competition in Istanbul, and has performed with her quintet in the Istanbul Jazz Festival twice. Her debut album is slated for release in late 2012, which will feature Peter Eldridge, Dave Liebman, and many other great musicians.

M’lumbo is a 8-piece multimedia jam band that crosses the boundaries of electronic, psychedelic, jazz, and world music. At this special performance the long-running shadowy and semi-legendary eight–piece band will celebrate the release of their twelfth album ’Tuning In to Tomorrow’ with  their special guestGrammy-nominated guitarist/songwriter Gary Lucas ‘The thinking man’s guitarist’-The New Yorker. The band includes Rob Ray, Paul-Alexandre Meurens, Vin Veloso, Cecil Young, Dehran Duckworth, Jaz Sawyer, Brian O’Neill, Jarek Szczyglak and other suprises. Come experience the band live in rare form and be ready to party!

Peter Stampfel & the Ether Frolic Mob consists of whoever is available and up for it whenever. Stampfel is performing. What is Ether Frolic? Ether Frolic is when ether came into use in the 19th century, it was widely introduced by Ether Frolics–a stage would be rented, the audience would be charged, the ’show’ involved people inhaling ether on stage and carrying on in a manner not common to 19th century behavioral norms.

Mostly Other People Do the Killing is a quartet founded on the idea that not only is jazz still alive and vibrant, but that it can and should be fun, engaging and thoroughly contemporary. Rather than settling into one style or historical period, MOPDtK fuses the entire spectrum of jazz and the various forms of improvised music it has spawned into a single, seamless melange of what they call “uber-jass.” 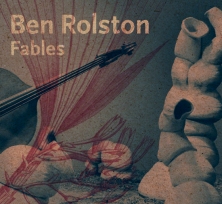 Bassist/Composer Ben Rolston brings his quintet to Cornelia Street Café to play music from his debut album Fables, released in April of 2012 on Envoi Recordings.

Bob Jones started his career as singer in his father’s church choir. He was Andy Statman’s guitarist in his legendary klezmer quartet and currently plays with Boo Reiners in the Plunk Brothers, with the Danny Kalb Trio and with many Old Timey and Bluegrass musicians in the city.
Jon Sholle is a guitarist who has worked with such musicians as Vassar Clements, Larry Campbell, Keith Carradine, Allen Ginsberg, and Bela Fleck. He was a member of the David Grisman Quintet and has also released two solo albums on Rounder Records.

Antipop Consortium is an alternative hip hop ensemble based in New York. Conceived in 1997 out of a series of daring collaborations at the “Rap Meets Poetry” sessions of the Nuyorican Poets Café, the group has developed a cerebral, visionary strain of hip hop that incorporates the fragmented rhythms of contemporary electronic music with the confrontational, interrogative stance of rap.

Nicky Da B is a new generation New Orleans Bounce artist who is coming into national prominence in the footsteps of Big Freedia. At 21 years old, Nicky has already shared the stage with all the legends of the Bounce community and has traveled with Rusty Lazer to New York for a run of amazing shows in January and March of this year, performing at Santos Party House, Brooklyn Bowl, Public Assembly and with luminaries such as Roxy Cottontail and many more.

What better way to celebrate the John Cage centenary than with postmodern sounds of silence? Composer Phil Kline (Unsilent Night) draws upon the words and voices of Jim Jarmusch, Philip Glass, Meredith Monk, Bill T. Jones, and La Bruja, among sixty writers, artists, and musicians, for a GPS-based work inspired by Indeterminacy, Cage’s collection of one-minute epiphanies. Use your smartphone and a free downloadable audio app to trigger sixty koans scattered around the Lincoln Center campus. A podcast version will also be available.

Latin-Grammy winner Octavio Brunetti on piano; Machiko Ozawa, former concertmaster of Orquesta Sinfonica Sinaloa de Las Artes, on violin; and acclaimed composer/arranger Pedro Giraudo on bass. Together, these three awesomely talented virtuoso musicians capture the passion and excitement of Argentine tango in a repertoire ranging from traditional favorites, to contemporary interpretations. They have dazzled audiences in New York, Washington DC, South Carolina, Virginia, and in Tokyo, Japan, with an upcoming tour to Japan this August.  This appearance at Joe’s Pub will debut their new repertoire, which they will feature on their tour and will be the basis of their next CD.