We are so pleased to announce our premier events for The 22 Magazine! We hope you can join and help increase the amazing 22 community!

Harnessing the ancient power of scroll storytelling, some of the world’s finest creators gather to show off their work on large and small rolls of parchment. Created in 2008 by artist Will Varner, Scroll Bowl was a unique way for artists and illustrators to present their work large scale and interactively. In 2009 Will Varner left the Scroll Bowl project to pursue a professional illustration career and artist/curator John Jennison took over the project. After accepting Jennison as one of the premier issue contributors,The 22 Magazine partnered with him to present Scroll Bowl as both a performance and installation event. Drawing from an array of traditions, commentary and communication, Scroll Bowl V presents a modern look at the scroll as both an object and as a tool. 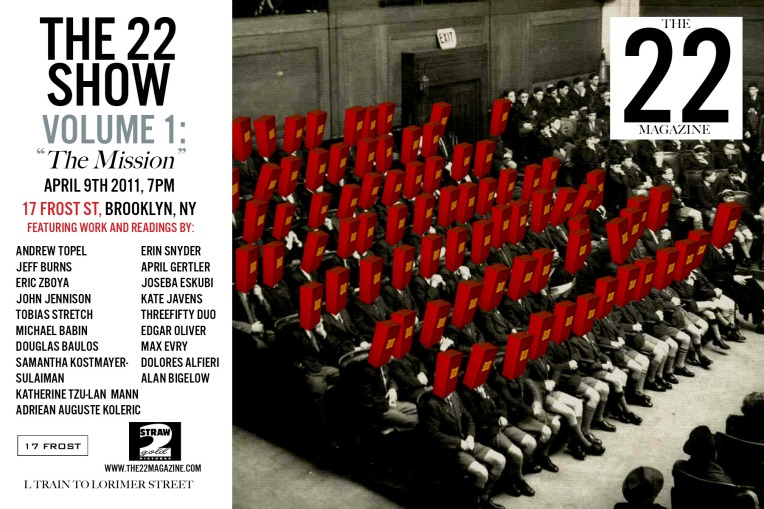 The 22 is annual arts and literature online magazine that seeks to explore connections and intersections between the works of artists, musicians and writers. In some portions of The 22 the structure is presented as a diptych or sometimes triptych, allowing the viewer to actively participate in the task of opening the hinges that link conversation between the pieces.

The 22 Show was formed to showcase the talents of each issue’s contributors. This year’s show will feature performances, music, reading and film work from several of the artists and writers. By forming a collective group and by carefully selecting contributors whose work is enhanced through combination, The 22 Show is a comparison and celebration of the voice of the artist as solo and unified.