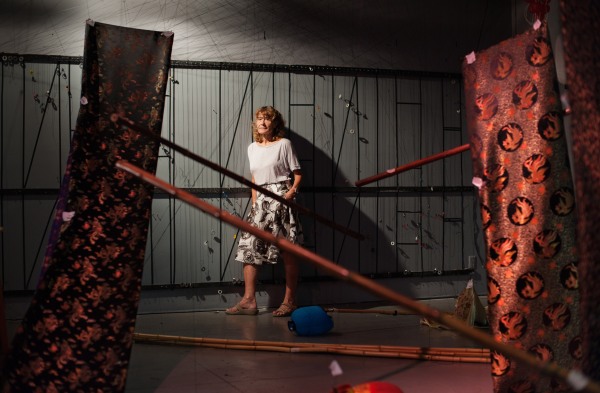 Strings break. They bend. They lead, and they follow (if prompted.) It was physical strings that brought me to Hanne Tierney’s most recent piece “Strange Tale of Liaozhai” at HERE arts center, (as it did many) and it was more metaphorical ones that lead me to learn her rich history as both puppeteer and person. Known for her elaborate puppet rig utilizing (this time) over 114 strings, even Tierney’s herself in an interview for her past work (My Life in a Nutshell) says “80 strings can tangle, can break, can slip out, it’s such a high risk business that I kind of say “Why am I doing this?” Knowing Tierney’s tragic history of losing her son in Sierra Leone and picking up his designated NY space to create a community art gallery (FiveMyles) that has won an Obie for its ability to energize a transition community, it’s easy to see there is very little that truly scares Hanne.

Whether the audience echos the sentiment of “why” or not, they certainly are aware of the elements of “danger” or at least the intricacy involved with watching three dedicated puppeteers manipulate the medieval mechanism (creaky as a ship but with no threat of storm) that Hanne has created. A self-professed “art performer,” who works in galleries as well as theaters, Tierney’s work, while sometimes autobiographical, is also the product of her love affair with Gertrude Stein’s ideal of theater without actors. “Strange Tales of Liaozhai” was aesthetically driven by Stein’s piece “A play called Not and Now,” which employed ball gowns and tuxedos to create a piece which deconstructed the foundations of theater. 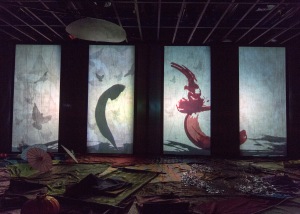 “Strange Tales” uses 18th century folktales to tell the stories of a bad trade among a pigeon merchant, and the story of two lovers (one a fox spirit) who struggle for martial bliss. The pigeon piece does so through shadow screens and the hand drawn visual projections of Hannah Wasileski, while the lovers pieces utilizes the inanimate puppet players in the forms of scarves, bamboo, umbrellas and the like. Both pieces were joined by the complex, strange constructions of Jane Wang, who played a setup that rivaled the string mechanism of the puppeteers in its visual interest and sound. The stories though slow, are poignant and worth the patience of watching, however anyone who has seen (or heard) Hanne’s work, knows that a good portion of the engagement of the audience relies on her beautifully subtle, slightly accented narration, and on the puppeteer’s ghost within the machine movements. The genius behind creating something that resembles the interior of a grand piano, complete with string manipulators is almost enough to capture audience for the full hour in itself.

The “new” puppets in the piece (many of Tierney’s older “puppets”-bamboo poles, beaded curtains made appreciated cameo appearances), were mostly the silk scarves which made up the bulk of the cast. The stage itself was cloaked in purposefully laid cloth, and each main character was represented in choice colors, that changed pattern with movement and time across the stage and in the plotline; the overly doting mother in deep reds and pinks, the brash, fickle uncle in blacks and blues, the young lovers in pinks, sky blues and rainbows, and the fox spirit, a satiny silver.

Jane Wang’s setup included a variety of musical instruments (perquisite toy pianos included) but the most interesting moments came when she engaged the “space plates” (metal plates balanced on balloons, balanced in plastic containers), and more simply in her playing of the upright bass which she plucked to create beautiful movement and drama within the puppet pieces. Jamey McGilray and Shawn Lane helped manipulate the puppet strings and did so with a great amount of grace and ease.

“Strange Tales of Liaozhai” the book certainly relies on a great amount of history (with humans or no) to appreciate its tales and appropriately enough Hanne’s work is no different. Woven within the strings she pulls there are connections to both her past apprenticeship at a spinning wheel factory, her ability to see more than mundane in simple machinery, and her choice to move forward even and sometimes because of the great danger within.

LIVE from the NYPL: ROBERT WILSON with Rufus Wainwright, Lou Reed, Lucinda Childs, and others in conversation with Paul Holdengräber
Friday, September 30, 2011 7:00 p.m.

Robert Wilson will talk to Rufus Wainwright, Lou Reed, Lucinda Childs and others about his artistic collaboration with them over the years.  The conversation will be instigated by Paul Holdengräber.

Robert Wilson is among the most distinguished theater directors of our time. Creator of such works as The King of Spain and The Life and Times of Sigmund Freud, Wilson also collaborated with Philip Glass on the hugely successful opera Einstein on the Beach. Today, Wilson’s accomplishments are recognized not only in the spheres of theatre and opera, but also in the visual arts. Retrospectives of his work have been held throughout the world, and his installations have appeared in several Guggenheim museums, among other venues worldwide.

A Group Show and Story by Rachel Mason

She was a lion sitting on her dad’s shoulders. They formed a totem of two heads, one large, one small as they walked down the street. Powerful with her lion-painted face, she stuck her tongue out at a man passing by. He tripped on the side of his foot and then fell to the ground.

The girl’s father didn’t realize that his daughter scared the man, causing him to fall. The man already had a fear of children. The girl’s father also didn’t realize that had he reached his hand out to help, the man wouldn’t now have two permanent rods conjoined in his hip bone, and wouldn’t have lapsed into a permanent hallucinatory state from which he’d never recover.

END_OF_DOCUMENT_TOKEN_TO_BE_REPLACED

KRONOS QUARTET: Awakening: A Musical Meditation on the Anniversary of 9/11

Pioneering contemporary music ensemble Kronos Quartet (More Than Four, 2007 Next Wave) returns to BAM with a heartfelt program comprising 12 compositions—including works by Michael Gordon, Terry Riley, Osvaldo Golijov and Gustavo Santaolalla, and John Oswald—plus gripping arrangements of traditional songs from around the globe. This stirring collection of works reflects upon those instances where traditional language fails us, and music steps in to restore what violinist David Harrington refers to as “equilibrium in the midst of imbalance.”

END_OF_DOCUMENT_TOKEN_TO_BE_REPLACED 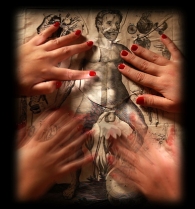 MoMA Premiere: Through the Weeping Glass: An Evening with the Quay Brothers
September 24, 2011

As part of a limited three-city tour that includes premieres in Philadelphia and Los Angeles, MoMA presents the Quay Brothers’Through the Weeping Glass: On the Consolations of Life Everlasting (Limbos & Afterbreezes in the Mütter Museum), a new work by the American-born, British-based independent filmmakers. In the tradition of their prior museum documentaries—The Phantom Museum (2003), on London’s Sir Henry Wellcome Collection, and Inventorium of Traces (2009), on Poland’s Lancut Castle—the Quays return to the city where they began their education as graphic designers to explore the medical collections of the Mütter Museum, part of the College of Physicians of Philadelphia. Examining obscure archives, antique volumes, and artifacts, Through the Weeping Glass investigates marvels of pathology and anatomical oddities, finding poetry in the ill-fated, true-life stories of the “ossified man” Harry Eastlack and famed Siamese twins Chang and Eng Bunker. The documentary Behind the Scenes with the Quay Brothers, shot during production ofThrough the Weeping Glass, also premieres. Directors Stephen and Timothy Quay will be present to discuss the film with writer David Spolum and moderator Barbara London.
END_OF_DOCUMENT_TOKEN_TO_BE_REPLACED 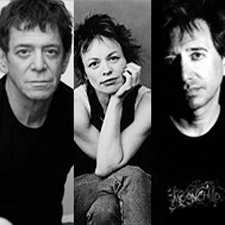 Three legends of the New York Underground combine forces for an evening of extreme improvised music. “The most important multimedia artist of our time,”(LA Times), Laurie Anderson is best known for her multimedia presentations and musical recordings that have challenged and delighted audiences around the world for more than 30 years. Tonight Anderson teams up with husband Lou Reed – arguably one of the most influential musicians in rock history whose band, the Velvet Underground, redefined the music of the late ’60s. Also joining them tonight is maverick composer/performer and godfather of the Downtown New York scene, John Zorn.

END_OF_DOCUMENT_TOKEN_TO_BE_REPLACED

This updated version of the original deliriously madcap fantasy once again features the soaring song stylings of demented diva Joey Arias surrounded by an eye-popping theatrical extravaganza conjured by a team of puppeteers under the direction of Basil Twist. Channeling lurid celluloid dreams, macabre nightmares and bizarre premonitions, the adventure begins with an alien abduction and concludes with a stupendous Busby Berkeley-esque finale. Along the way, the throaty chanteuse belts out pop, rock and jazz standards in addition to some original tunes by Alex Gifford as Twist and company work their magic with vintage marionettes, anatomically correct puppets and fantastical scenic elements.

END_OF_DOCUMENT_TOKEN_TO_BE_REPLACED 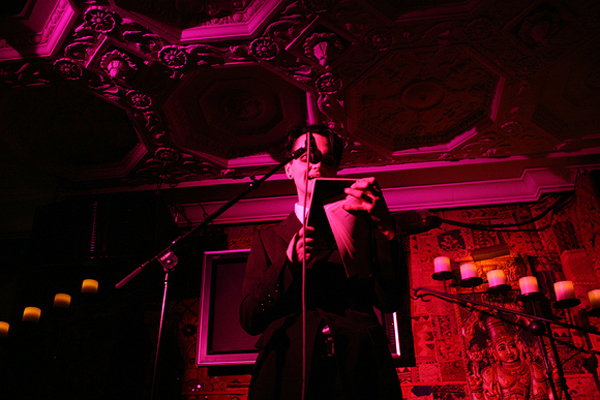