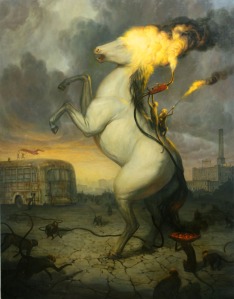 The Passions, Martin Wittfooth’s first solo show in New York, is a contemporary exploration of sainthood, martyrdom, and religiosity that still dominates the ideological landscape of the modern world, and displays the prerequisite acts most often performed to attain such states of veneration such as violence, self-sacrifice, and suffering. In Western philosophy, “The Passions” refer to strong biologically driven emotional states that seduce one away from reason. Yet the term’s origin is to be found in the Latin word, “passio”, which means, simply, “suffering”. Consequently, the term is connected to the most famous act of martyrdom: the crucifixion of Christ.

Join editor Kevin Simmonds & 10 contributors for the NY launch of this groundbreaking anthology!

Klemens Gasser and Tanja Grunert are pleased to present “Early Works”, the first solo exhibition of Doug Jeck at Gasser Grunert gallery. Doug Jeck is a Seattle, Washington based artist whose sculptures are influenced by static physicality and historicity, with the human object at the center. His life-like sculptures are an amalgamation of clay, hair, concrete, fur and wood that explore Jeck’s perception of various early historical periods and figures.